I am a big fan of words. I journal, blog, and ramble whenever I’m given the chance. The truth is that I’ve always been a gifted wordsmith; it’s one of my sincerest joys to put words to the seemingly indescribable. That said, it’s always interesting when people turn the tables on me and morph their words into gifts too. It’s happened two particularly memorable times in the past few weeks.

The first instance was sparked by a dear theatre professor of mine. I’m currently taking a few classes to finish out the Acting Certificate program I started last semester. One of the best parts of any theatre class is the privilege to attend shows and write performance reviews. But since we’re still in ye olde Covid times, there’s barely any live theatre going on at all. Instead, we’ve been asked to watch three plays on BroadwayHD and write an essay about each one. It’s fun, I promise!

I had an absolute blast cranking out those papers. I watched three incredible plays and poured my heart into those reviews. But after hitting submit, I mostly forgot about them. I decided to finally check my grade on a sleepy Sunday night last month. Turns out my professor really liked my work. Dr. Will commented that they were “excellent” and even added that I should consider becoming a theatre critic. Upon reading his kind words, my cheeks glowed with pride as I stared at my computer screen. My feet didn’t touch the ground for at least an hour. No one had ever told me anything like that before. I certainly would have never seen that potential in myself.

I told you that whole story to tell you this: when you see something extraordinary in others, take the time to speak it over them. You have no idea how powerful your words are. Don’t believe me? I have one more story to prove it.

To preface, I spend a stupid amount of time on Twitter. It feels like being in a crowded room and bouncing from conversation to conversation. Since my normal routine revolves around retweets and miles of scrolling, I decided to shake things up and tweet at my celebrity crush. The crazy part is that he actually responded!

I was absolutely geeked, to say the least. His response made my kind words feel worth it. (Which is not the point of being kind, but never hurts to hear.) Thanks to the mystical powers of the internet, I had the chance to speak words of life over someone I genuinely admire. Moreover, someone who in all honesty, probably does not get that kind of praise very often. It reminded me that I’d made a teeny tiny difference in his world, even if it was just putting a smile on his face.

So like I said earlier, believe me when I say your words are a gift. I think you’ll be surprised to see what happens when you give them away. 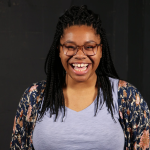